The Indonesian island of Bali is widely known among tourists and vacationers around the world. Arriving here, you are immersed in a unique atmosphere of national color, picturesque natural landscapes and amazing architectural creations.

In Bali and the neighboring smaller islands there is really something to see and the wonderful photos you get for your Instagram are hardly worth mentioning!

We present the most popular attractions and places in Bali

For many years, this magnificent temple was considered the most important sanctuary on the island. The temple is located on a rocky islet near the coast and you can do the walk to it at low tide. Many people from all over the world seek to visit this holy place. Tourists are allowed to stroll along the lower part of the temple without wearing national Balinese clothing. Access to the temple itself is permitted only to Hindus.

It is very picturesque here, the very location of the temple allows you to take beautiful photos with scarlet sunsets, dark blue waves breaking on the rocks, ancient walls, which are dilapidated in places, but still majestic and inspiring a sense of awe. 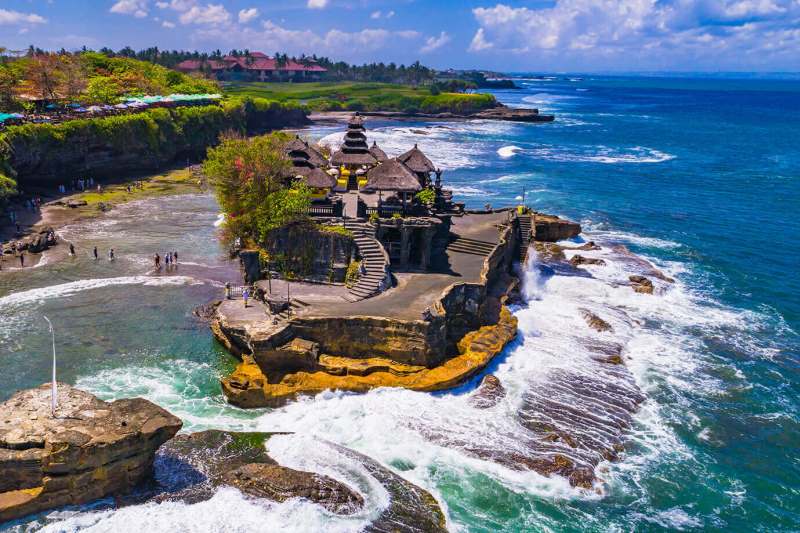 In general, rice terraces are a visiting card of Bali. Jatiluwih terraces extend over an area of ??303 hectares at an altitude of 850 meters above sea level near the foot of Mount Batukaru. These places attract with not only all shades of green, but also the ancient irrigation system. This system is installed only in Bali and has been operating since the eleventh century. It is recognized as a UNESCO World Heritage Site. 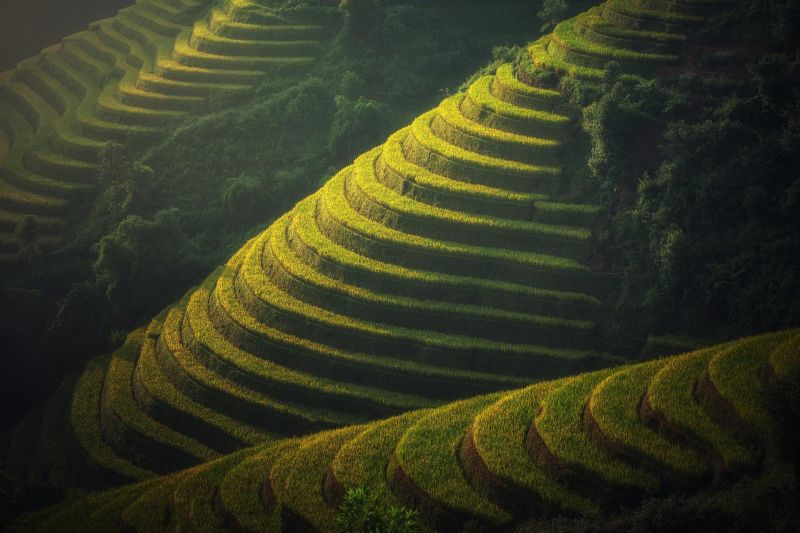 A dormant volcano with a height of more than 1700 meters, from the slopes of which there is a stunning view of the lake having the same name. In fact, in the hollow of the dormant ancient volcano, which is more than 14 km in diameter, a new, active volcano has grown. It erupted three times during the twentieth century. At the foot of the volcano, there are hot springs that can also be visited.

The route to the summit is only three kilometers, but it is forbidden to climb the summit singly. At the foot, where the official station is located, you must hire a guide to accompany you. 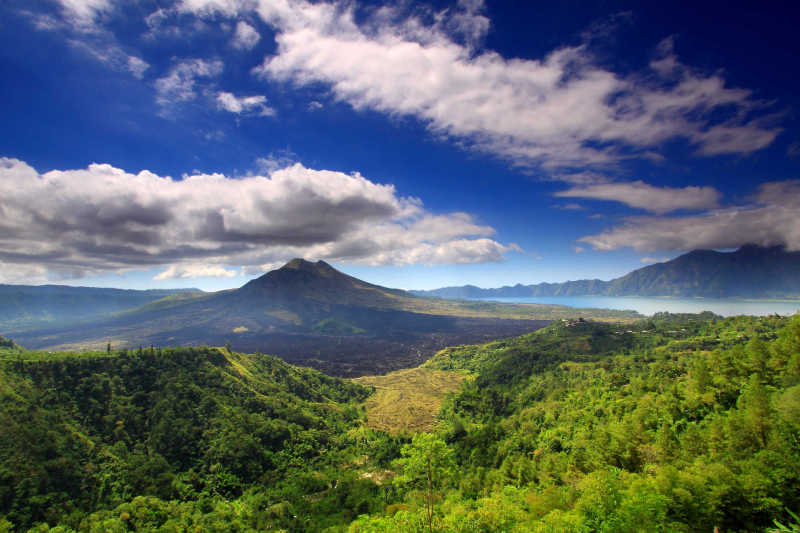 Not far from Ubud there is the elephant safari park in Bali. This tourist complex was opened in 1997; its area is three and a half hectares. About thirty elephants live on such an extended territory, most of which are trained and calm. Part of the elephants were imported from the Sumatra Island, but there are already ones that were born here. Tourists can ride on the backs of elephants sitting on light teak wooden seats.

There is also a museum and info center, art gallery and spa. The park is open daily, seven days a week. In addition to walking and playing with animals, you can book a buggy ride, rent a mountain bike or go rafting. 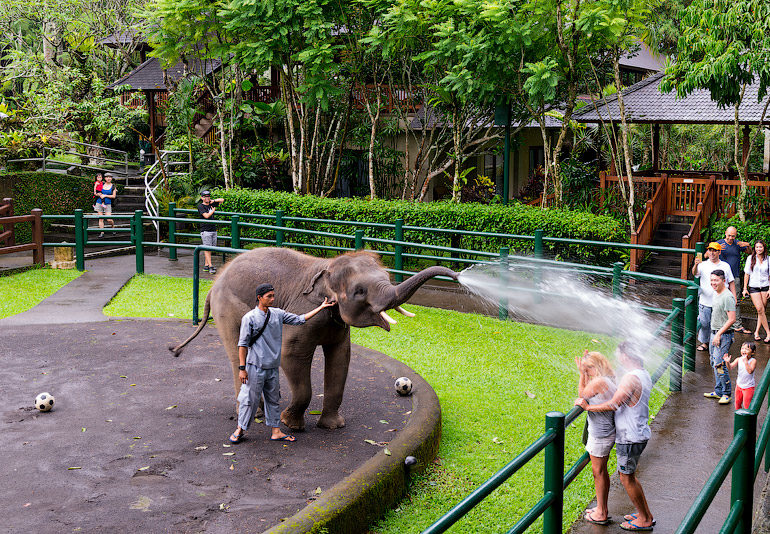 If you like to take a walk in the fresh air and are not afraid of long hikes, then you can go along the famous Artists Walk. This is a well-known tourist route, which takes several hours. The path winds between two rivers along the ridge of the hill; this is why breathtaking views of evergreen nature open up on both sides. The best time for a walk is dawn. At the end of the path you will find a cafe and spa. 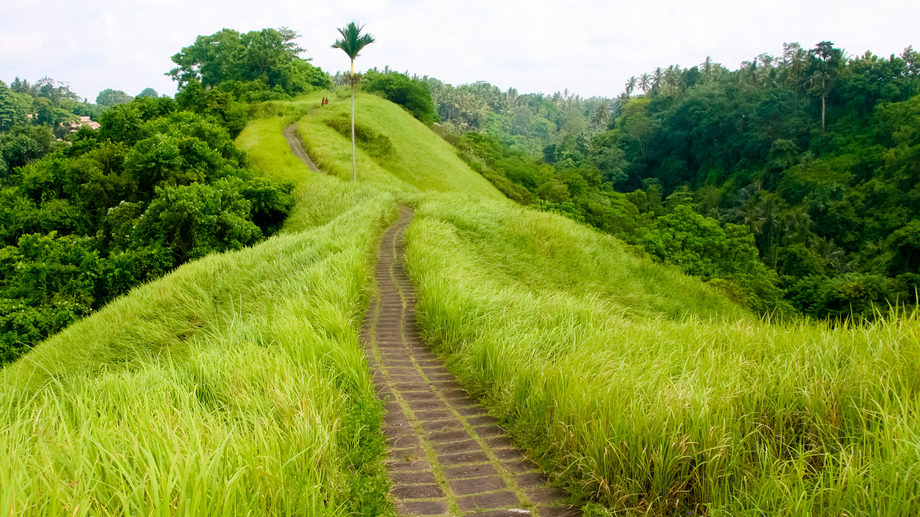 Very often in Bali you can see the gate on the way to the beaches, temple complexes, on the roads to the village or just to a new area of ??the city. Such gates are called Candi Bentar, which can be translated as “broken gates”. Their very design hints at the dual nature of the universe – there is good and evil. Locals believe that, passing through such a gate, a person is cleared of anxiety and fears, gaining peace of mind and calm. 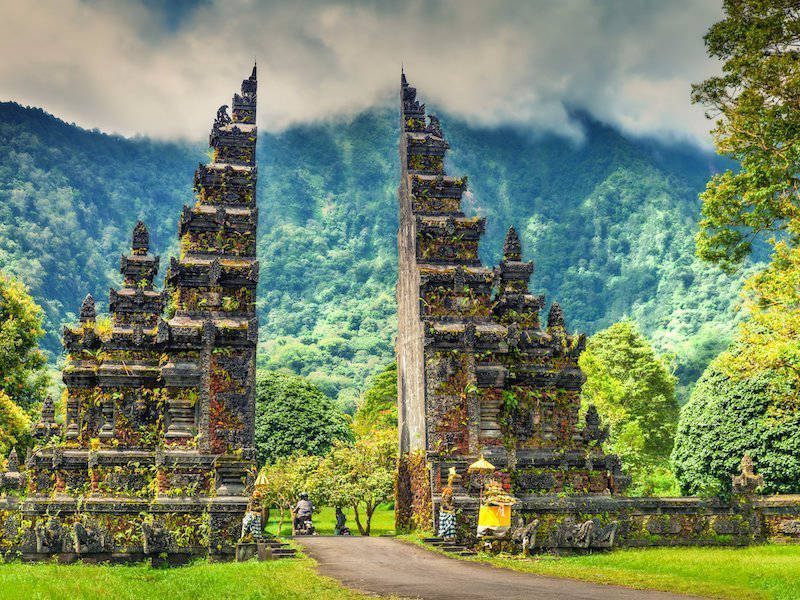 One of the most interesting architectural attractions is located on the east coast of Bali. This is the ancient city of Amlapura and its royal palaces. In the old days, the city was the capital of the kingdom of Karangasem, which became at the beginning of the twentieth century the strongest state structure in Bali. When the Dutch arrived on the island, the kingdom did not show much resistance, and it allowed saving beautiful buildings from destruction.

Tourists have access to the Puri Agung Palace, which previously served as the residence for the royal family. You can see pagodas with nice carvings, visit the pavilions, where old interiors with furniture are still preserved, and also take a walk through the picturesque area. 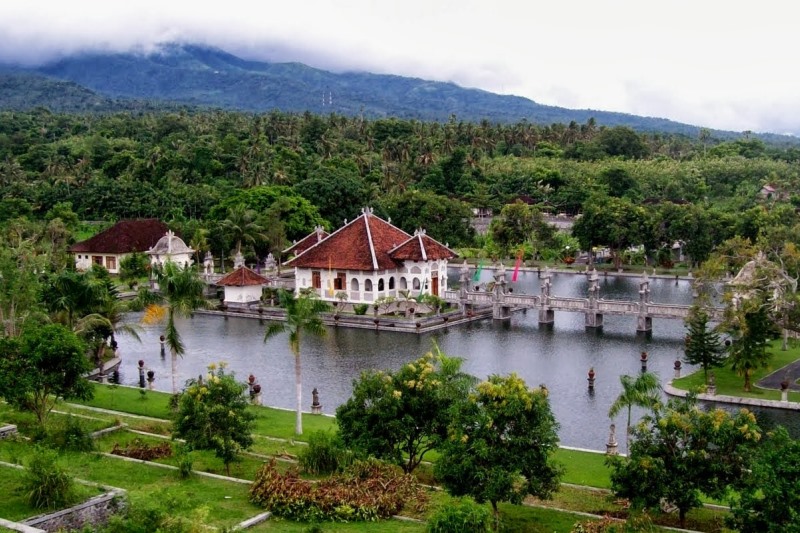 Elephant caves are located near Ubud. In the eleventh century, they served as a refuge for Hindu hermit monks. They cut the demon’s face in the rock, which closely monitors tourists coming here. A large room inside the cave is filled with sculptures and statues, among which is the statue of Ganesha, the son of Shiva. These caves were built by the indigenous inhabitants of Bali even before the aristocracy resettled here and before the priesthood of the Javanese empire.

To experience the atmosphere of this place, it is best to visit it in the morning, when there are almost no tourists. From here, you can stroll to several ancient altars and temples. 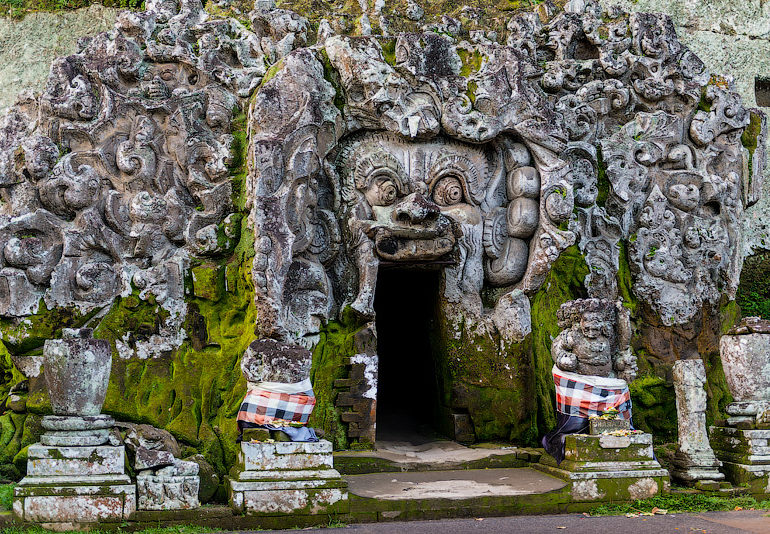 While walking to the waterfall, you can admire the plantation with coffee and growing spices. If you want to be alone with nature for a few minutes, then you should definitely visit this beautiful place. A feature of this waterfall is that there is no crowd of tourists, since the road here is not suitable for a sightseeing bus. The waterfall is located near the Buyan and Tamblingan lakes. In the rainy season, the waterfall is gaining its strength and is considered one of the most beautiful in Bali. 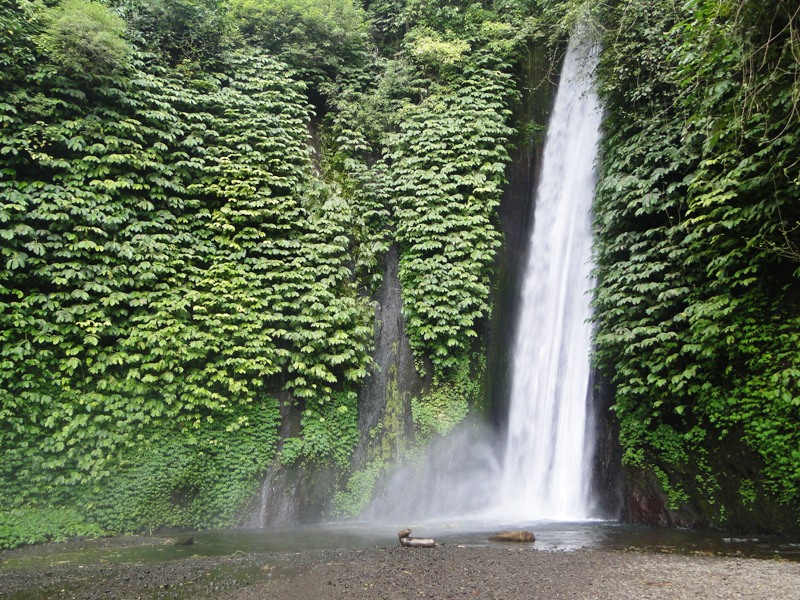 10. Park of birds and reptiles

This ecopark is popular with tourists. About a thousand birds belonging to 250 different species live here. Most of the local inhabitants quietly walks and flies through the territory of the park without sitting out in aviaries. During the walk, you can see peacocks, pelicans, flamingos, ostriches and other representatives of exotic species. Nearby is a reptile park where you can see the famous Komodo dragons, as well as pythons, iguanas and turtles. Visitors of the park are invited to watch the process of feeding animals as entertainment; themed films are shown in the 4D cinema.

The park is very popular among visitors with children and is ideal for family pastimes. 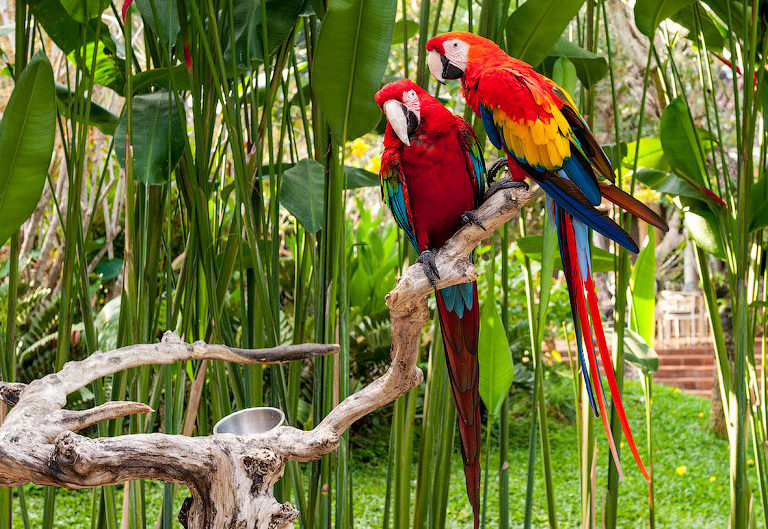 Bali's Best Cooking Classes
What to do with your Bumble BFF in Ubud
Why choosing Dive Concepts to dive in Ba...
What’s Hot in Bali This Week - 4 March